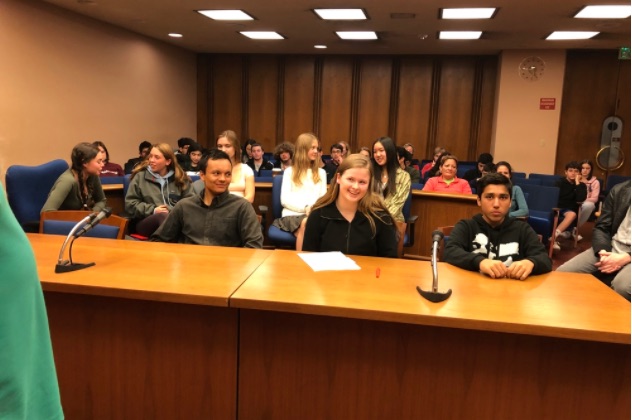 In her opening statement, 17-year-old youth advocate Eva advises jurors how to proceed and summarizes her “client’s” good qualities. “As you will see, Julian is genuine, well-spoken and friendly. I recommend asking him about his friends and family, his future plans and his activities outside of school.” (First names only of all minors are used to protect their privacy.)

Welcome to the YMCA Marin County (CA) Youth Court, one of 1,400 youth courts around the country that offer teens an alternative to traditional juvenile court. Eligibility varies from court to court, but the Marin Court is offered to teens with misdemeanor violations or minor felonies, mostly involving drugs and alcohol.  Most youth courts, like this one, use restorative practices where teens are asked to own up to their transgressions, develop plans with peers in the court to enable them to shift their behavior in a more positive direction and repair whatever harm they may have caused. The Marin County Youth Court also requires drug and alcohol safety training, engagement in a community project, and participation in the court as jurors, bailiffs and advocates, like Eva. Since 2004, some 1,250 youth have gone through the program, and 95 percent who completed it had a 6 percent recidivism rate. (See the attached document.)

Informing all the court’s techniques is a unique philosophy, or mindset, that most other courts have yet to adopt. In profiling Julian’s good qualities, Eva is taking her cue from the court’s 72-year-old Director Don Carney, who begins each proceeding with an orientation that puts ACEs, or adverse childhood experiences, and the trauma that they can cause at the center of the court’s approach.

Adverse childhood experiences is a term that stems from a landmark Centers for Disease Control and Prevention/Kaiser Permanente Adverse Childhood Experiences Study (ACE Study) of 17,000 adults that found a relationship between 10 types of childhood traumas, such as any type of abuse or neglect, and chronic health conditions. Subsequent research has linked toxic stress from ACEs with changes in children’s brain development and has shown how interventions, such as parenting education, family therapy and building resilience can offset the impact of toxic stress from ACEs.

The ACE surveys — the epidemiology of childhood adversity — are one of five parts of ACEs science, which also includes how toxic stress from ACEs affects children’s brains, the short- and long-term health effects of toxic stress, the epigenetics of toxic stress (how it’s passed on from generation to generation), and research on resilience, which includes how individuals, organizations, systems and communities can integrate ACEs science to solve our most intractable problems.

“Some of us landed, like I did, in a challenged family system, a rough-and-tough tumble community,” says Carney, a lean figure who sports a blue jean jacket, a white pony tail, and speaks in a gentle and deliberate voice as he addresses the courtroom.

That kind of environment puts young people’s brains into a kind of “fight-or-flight” overdrive, Carney explains. These survival skills can help a child fight back or remove himself from the situation, but they can work against them when they show up at school.

“You're labeled defiant or non-compliant,” Carney says. “And young people get labeled pretty quickly when they've got easily triggered behaviors.”

Block recalls a pivotal moment during his first day of training to be an advocate at youth court, a position that requires six hours of training and typically draws youth who have already spent weeks or months participating in youth court in some capacity. Carney came into the room and asked for a show of hands of who had previously attended youth court.

“I’m the only one who hadn’t been involved in court whatsoever,” recalls Block, who felt a sudden surge of doubt about diving into it. So, he was surprised by what came next: Carney used that moment to single out Block and compliment him. “He said to me, ‘I like that you get straight into things. I appreciate that.' It was an incredibly supportive comment that I had never experienced from an authority figure in my life,” says Block, who attributes his interest in promoting equity and preventing ACEs through public health policy as a career path to his youth court experience.

It’s not clear how many youth courts are explicitly using tenets of ACEs science and a trauma-informed approach, but according to a recent report by the National Center for Mental Health and Juvenile Justice, the experience of trauma among youth who end up in the juvenile justice system is certainly widespread. The report notes that youth who are involved in the juvenile justice system are more likely than their peers to have had multiple types of traumatic experiences: “These are not just incidents, but types of adverse stressors (e.g., physical abuse, sexual abuse, domestic violence, community violence, life-threatening neglect) that impact youth before they first come to the attention of law enforcement.”

A sobering statistic along these lines was behind the formation of a youth court program under the auspices of the San Bernardino City Unified School District in San Bernardino, CA, which also uses a trauma-informed approach. According to an article in the journal CSUSB Scholar Works, about one student in 20 statewide was suspended from school in the 2011/12 school year, and one in 1,000 was expelled. But in San Bernardino County, there was one suspension or expulsion for every five students. 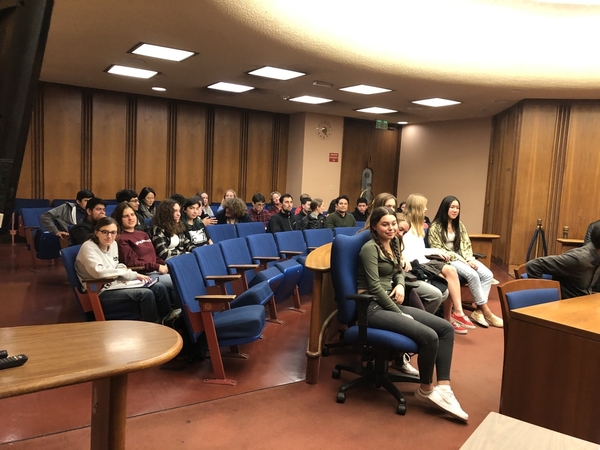 In keeping with tenets of trauma-informed practices, parents are encouraged to come to court with their children to observe the proceedings before their own proceeding takes place. That helps to instill a sense of safety and familiarity for the child, says Carney, and to ensure that “there are no surprises”.

But parents are strictly forbidden from attending their own children’s cases, a decision Carney made after learning the hard way why that was necessary. “We had a father in the room, and the [advocate] said, ‘How are things going at home?’ And the [respondent] points to his father and says, ‘That son of a bitch beats me every night.’ And the father buried his face in his hands. I had to file a [Child Protective Services] report,” says Carney. “So, it became very clear to me that [the courtroom] wasn't a safe environment for that kind of transaction. A young man had to go home with their father. I had to tell the father that I was filing a CPS report.” That was the last time a parent or guardian was allowed into their child’s hearing.

In guiding jurors about what to ask the respondents, advocates also make sure not to mention any sensitive topics that might be triggering for a respondent. Seventeen-year-old Sacha, who has served in several roles in the court, explains: “There have been, like, some times where they say, ‘Oh, I don't want to talk about family,’ And so I have to tell the jurors that they can't ask about their family because something is sensitive there and they don't want to talk about it. And that's okay, because we have to respect that.”

When she herself was a respondent (she was cited for possession of alcohol), Sacha says she felt supported in the process. “I didn’t feel like they were attacking me in any way. It was, like, super chill.”

Sacha and the other participants in the program have learned about trauma and resilience through a series of teaching tools, including a TedTalk by California Surgeon General and ACEs education trailblazer Dr. Nadine Burke Harris, as well as the documentaries Paper Tigers and Resilience: The biology of stress & the science of hope. 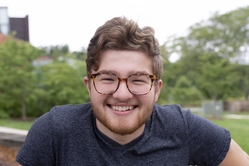 These resources made a lasting impression on Noah Block, now 21, as did the sense of community he felt while participating in an internship at youth court at the age of 14. “As a young person who has been bullied for many years and ostracized by my community, I found myself welcomed in a way that I had never experienced before,” he says. “I was able to build a level of resiliency through talking to other young people and finding a sort of a shared connection, even though we came from very, very different backgrounds.” 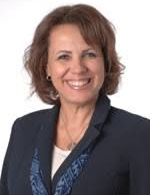 "We have kids who have been trafficked, and a lot of our kids have parents who are incarcerated,” says Mikki Cichocki, the program facilitator of the youth court. “And [in our youth court program], we build a bridge so they can talk about that and let them know they’re not alone.” Cichocki says that they provide counseling services for their youth from a steady stream of adult and peer mentors, as well as food and a safe place to spend time. Some 500 students have gone through the program, and 80 percent who complete it have a recidivism rate of under five percent.

Back in Marin, the jury has finished asking questions of Julian, who said he stopped smoking marijuana at school, has dreams of becoming an engineer and is building back trust with his mom “by doing what she wants me to do.”

Eva, Julian’s advocate. has consulted with the jury and presents her closing statement. “Julian you were super open, so today we’re recommending two to four hours of jury duties and 15 to 20 community service hours,” she says.

The jury accepts the advocate’s decision and says that they’ll see how it all went when Julian returns in three months time.