Even during this time of COVID-19, cases are still referred to Marin’s Youth Court, though now the sessions are held digitally. On a recent virtual panel, the youngest juror was 13, and the oldest was 21. The need for support is greater than ever as cases have increased by 185% this past year since the San Rafael Police Department closed its Youth Services Bureau. Not only is the caseload growing for Don and his team, but the program is expanding to Youth Courts around the Bay Area that look at the Y’s program as a primary model for adopting restorative practices.

Many city officials, not just the youth in these programs, have recognized how significant this program is for families and the community. Probation, police departments, and schools now refer cases to the Y’s Restorative Solutions program in Marin County. The overall goal is to expand the program throughout California, and the results back it up: the Y’s Restorative Solutions program in Youth Court is helping youth by providing a productive alternative. 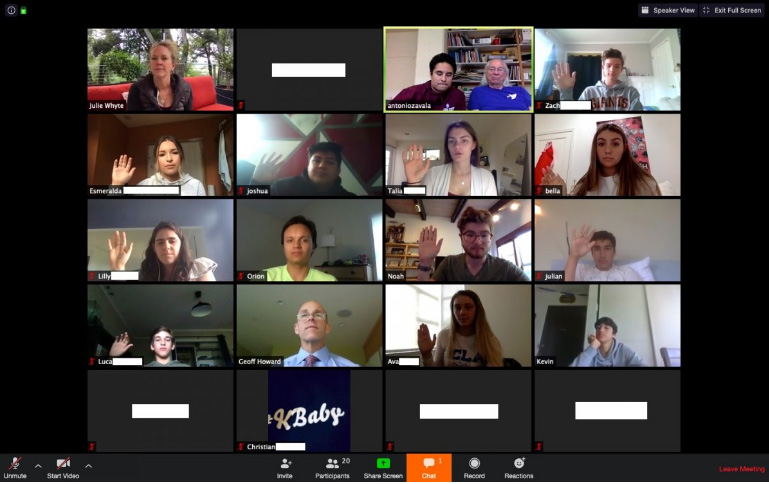 It seems that anyone who becomes a part of the restorative justice process stays a part of it, and that is the overall goal. Many respondents who went through the program come back to volunteer and give back to their communities. The Y’s Youth Court encourages critical thinking, develops emotional intelligence, and promotes leadership skills. Perhaps more importantly, the program seeks to identify personal implicit biases and promotes jurors to question respondents based on curiosity rather than judgment. “This program makes a difference. It impacts lives. Respondents, advocates, and jurors learn so much about people and their experiences, and the way it affects the community,” Talia, one of the 15-year-old juror says after a court session.

“He is a good kid. Sometimes they just make bad choices.”- Romina, mother of a Youth Court program respondent.

Like many parents, Romina did not realize how much trouble surrounded her son until she got a call from his high school. They had caught her son with marijuana on school property. She immediately went to the school, concerned about what would happen next.

Remnants from the zero tolerance era have allowed middle and high schools to use suspension, detention and expulsion if a student breaks any rule. Once a child is out of school, not only is it hard to catch up academically, it may force working parents to leave their child at home alone during the suspension; which could lead to more delinquency while unsupervised. Romina’s son, Luigi, was referred to Marin County Youth Court, a program of the YMCA of San Francisco. The San Francisco Y’s Restorative Solutions program would offer Luigi the opportunity to reflect on his choices and craft a restorative plan to repair the harm he caused to his family and the community.

Romina believes their involvement with Youth Court was enlightening for Luigi, that it helped him see how easy it is to get in serious trouble, and respect alternative perspectives. Luigi served on the peer jury and became a respondent advocate. Like so many others who go through the program, he completed the program and was still drawn to Youth Court. He continued volunteering after he completed his resolution. “He kept going for over 2 years after finishing his resolution plan!” Romina proudly exclaims. Luigi’s family has embraced Youth Court, too. When his younger sister entered middle school, she started volunteering as a juror for Youth Court. Romina says she’s there every week. She volunteered in court this past year and is now taking part in the sessions virtually, as COVID-19 has moved the court sessions online.

“He’s a good boy. It was peer pressure, but sometimes when you follow your peers you get into trouble. This was his second year of high school. He was a kid.” Romina feels the program helps the community in many ways, but especially by giving youth a chance to do things differently than before by taking accountability and providing a way to restore what was harmed.

“This offers the directions they need at a time they need it the most. It shows them that it’s okay to make a mistake, but there are consequences. It’s an amazing program.” Romina concludes.